The following is a detailed Remembrance of Tosh sent over the holidays to Bill VE7KDK and Jenny VE7KIY with best wishes to them and to all club members from Ken and Eileen Kajiwara with appreciation for us “being so respectful and friendly to both him and my mom.”

Tosh had an ordinary childhood living in Mission, going to the English and Japanese language schools, helping a friend deliver newspapers, sliding down Kudo Hill in the winter, doing chores like filling the bathhouse tub with water and gathering raspberry canes under the tub and lighting it daily, playing soccer, judo and fishing. To help out the family, he worked in the family fields and also at local hop farms.

After finishing Grade 8, a friend, Tash Moriyama, encouraged him to work for Peter Bain at Mike Johnson’s sawmill at Steelhead. He moved up from “whistle punk”, stacking lumber, felling trees to become a high climber and high rigger. By 1934 he was working for Kahei Kamimura. Tosh said the only injury suffered during those years were a few cracked ribs from walking on logs. Yosh Nishi worked for Kamimura as a faller.

As a young man, he had a group of friends centering around Frank [Mas] Hattori who had a vehicle. They would drive to Vancouver, down to White Rock to dig clams and to Harrison Hot Springs, swim and play baseball.

On December 4, 1941, Rev. Yutetsu Kawamura officiated at the marriage of Tosh to Harumi [Joyce] Kudo. Prior to that Tosh had bought and been given land upon which to build a home. They only lived there until the following March when they were evacuated to Alberta. From this union Tosh and Joyce had two daughters, JoAnn and Arlene.

As a result of the move to Alberta, Tosh worked in the sugar beets at Diamond City, helped with seeding at Byron Tanner’s farm in Wrentham and then worked as a farm hand and cowboy [riding, branding] at George Wesley’s farm and ranch. His sister Hideko cooked at the Wesley ranch in Granum.

Byron Tanner was able to get Tosh a job with Martin Madge in Milk River in February 1945 where he worked in the garage and on the Madge farms. He got to fly with Paul Madge fixing machinery on various farms and did the spraying of 2-4D as Paul had the rights for selling the weedkiller.

In 1957 he joined Lyle Walker in renting land to farm which he did until 1969 when his wife Joyce died. He sold his farm equipment and started to work for Daryll Smith at Frank Smith’s electrical store.  He also worked as an electrician for Mike Angyal.

During this time he played baseball, fished, curled, became a scoutmaster and an amateur radio operator under the call sign VE6VE.

On November 7, 1970 Tosh married Lillian Watte which gave him two new daughters, Eileen and Vivian. They lived in a trailer in Milk River which they then took to Salmon Arm. B.C. where they proceeded to build a house on Gleneden Road. Tosh found work as an electrician wiring houses for builders like Gordon Bettles, Hugh Metcalfe and Ian McDermott. Eventually he retired and Lillian and Tosh moved to a condo in Enderby. Lillian died December 2, 2003.

Lillian and Tosh were active in RV’ing with Good Sam and their own club, and with the mini-hamfests as Tosh kept up his amateur radio status as VE7DLA. They fished annually at Heriot Bay, made their own wine, entertained friends and family.

In 2008, at the age of 90, he was moved to Vancouver to be closer to family. He resided in a senior home where he had the near daily morning visits from Arlene and had wonderful home-cooked meals and home care at Eileen and Ken’s residence.

In early February, Tosh moved in with Eileen and Ken. On March 11. 2014, Tosh passed away peacefully at home with Eileen, Ken and Kiki at his bedside.

Tosh was a quiet, generous and gentle soul who lived a long and fulfilling life. He will be dearly missed. 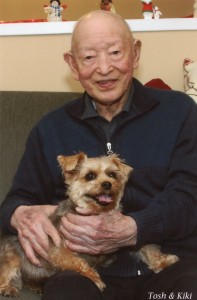