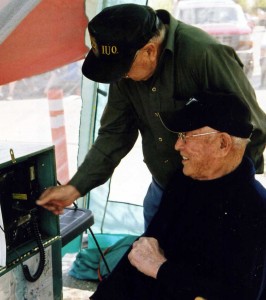 Tosh became a Silent Key on Tuesday, March 12, 2014 peacefully in the home of daughter Eileen and son-in-law Ken Kajiwara. He had recently taken a fall at the Edith Cavell Independent Living facility after which his regular weekend visits with the family became full time.

Tosh came to Salmon Arm from Milk River AB some time before the Eden Fire of 1973. In 1975 he often talked with Ken Hoshowski on simplex as Ken travelled from Kamloops to his work in Salmon Arm. These two felt the need of a repeater which soon followed after the 1977 formation of SARC in which they were both the prime movers. The foundation meeting was held in Ken’s  house who had by this time moved to Salmon Arm.

Although he rarely held office, Tosh was a tireless worker. In addition to co-founding the club, he was instrumental in promoting a long string of successful Shuswap Mini-Hamfests, the entertainment highlight of which was the Tahitian dancing performed by his award-winning grand-daughters in  2001.

Somewhat after his 90th birthday, Tosh’s family moved him from Armstrong to Vancouver where he could get more care. He was 96 when he died.

Always quiet but determined, Tosh with his winning smile had friends far and wide in the Shuswap, among them special friends Ted and Mary McTaggart at Haney Heritage Park who were also from Milk River.

Another valued friend, Bill Anderson VE7KDK helped Tosh for many years with this daily HF contacts to an older daughter in Toronto and drove Tosh from Amstrong to events in Salmon Arm when he was no longer able to drive safely.

Tosh will always be fondly remembered by those who knew him in the Shuswap.