Well, what a scorcher of a Field Day 2015. Temperatures reached 36 degrees late Saturday afternoon and Simon and Patrick were sweltering at their rigs, one in the trailer and one in the tent. I suspect that these conditions would meet the ARRL’s objective of learning how to operate in abnormal and less than optimal conditions. The setup crew, consisting of Simon/VE7SHG, Tom/VE7AMM, Eddie/VE7ETE, Bill/VE7KDK and Dave/VA7HDY, got the trailer parked on the service road behind the gazebo and the antennas up. Bill proved a stellar marksman with his compressed air gun to launch the line over the tree tops so that we could pull the antennas up. We put up the 80 metre and 40 metre antennas on Friday afternoon but the 80 metre was swapped out for a G5RV on Saturday morning. The tent, generator and radios were deployed Saturday morning by Robin/ VE7HMN, Mary/VA7MCH, Patrick/VE7FAT, Tom/VE7AMM, Simon/VE7SHG, Bill/VE7KDK and Winston/VA7WLH. Fortunately there was a tree handy to provide shade for the tent but as the sun moves so did the shade and so did the tent on a couple of occasions. Saturday night security was provided by Robin and Mary, secured in Bruno their trusty Winnebago LeSharo motorhome. Overall, the site at the Marine Park in Salmon Arm worked well. Thanks to the City of Salmon Arm, the Salmon Arm Recreation Society and Twin Anchors houseboats for their support and cooperation. Thanks also to Robin for stick handling the complicated process to get permission to use this site.
Taller trees would have helped to get the antennas higher but the Club did get good public exposure. Although there weren’t a lot of people using the park over the weekend, due to the heat, we did meet a few of the early Sunday morning dog walkers at least. The Yaesu FT900and FT920 radios were used for this event. Operators were Tym/VA7GE, Tom/VE7AMM, Simon/VE7SHG, Patrick/VE7FAT, Robin/VE7HMN, Darrell/VE7IU and, very briefly, Dave/VA7HDY. From the dupe sheets at the two rigs I counted six contacts made on 15 metres, nineteen contacts on 20 metres and sixty-seven contacts made on the 40 metre band. More operators would have enabled us to extend our operating time and more contacts could have been made. Band conditions were good considering the recent solar activities. 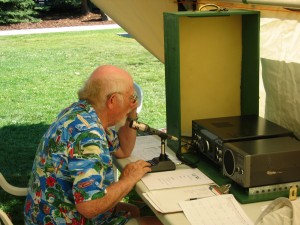 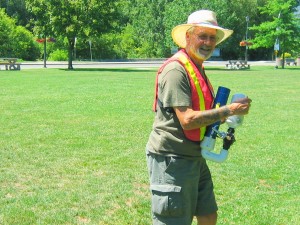 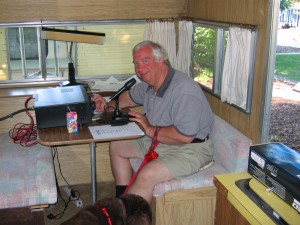 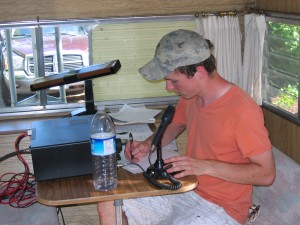 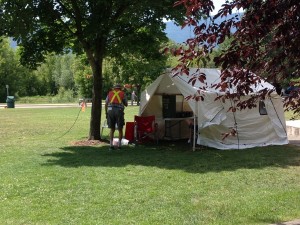 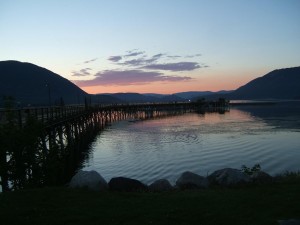 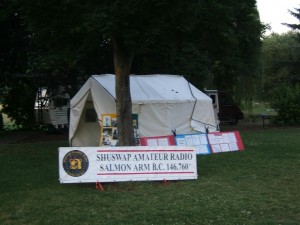 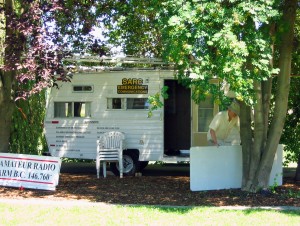 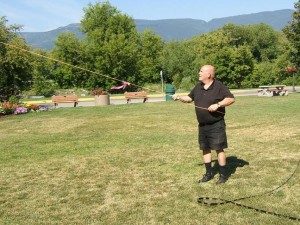 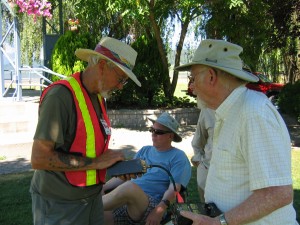 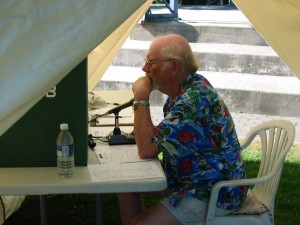 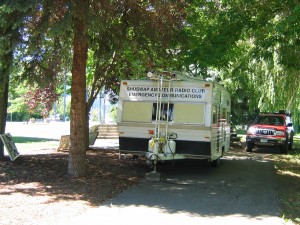 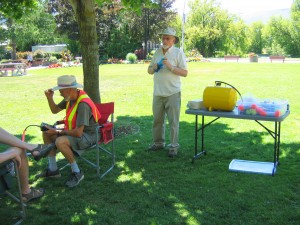 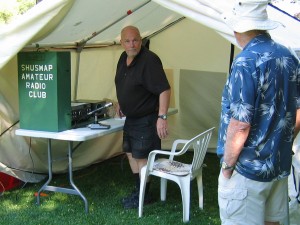 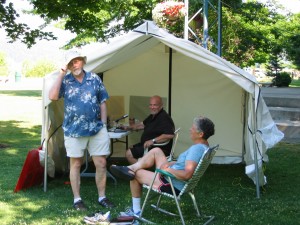 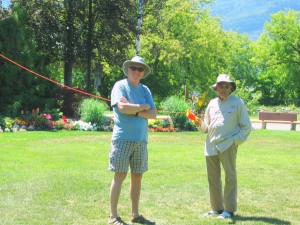